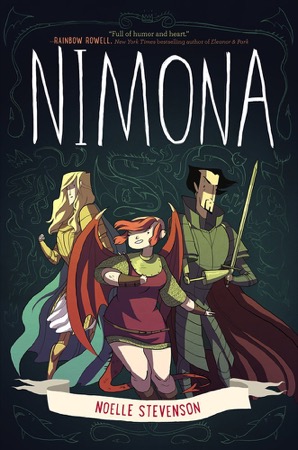 Nimona was a planned film that was supposed to come out on January 14, 2022, based on Noelle Stevenson's fantasy webcomic of the same name, but was cancelled due to Blue Sky Studios closing down. [1] The film was going to be directed by Patrick Osborne and written by Marc Haimes.

Unknown, but possibly the same as the webcomic.

The film was an adaptation of a webcomic of the same name that was in production at the Blue Sky studios. Nimona was reportedly 75% complete when Disney canceled it (meaning the film was almost finished) At this time, it is not known if another company will finish the film nor is it known how much money was invested in the unreleased film.

Rest of the cast is unknown.

Some time before, some materials from the film Nimona had apparently been leaked in publications on some platforms, publications that remain deleted to this day.

On July 14, 2021, some materials and footage of the unfinished film were uploaded to YouTube, the video is still available today:

PD: The video can be updated by the user, in case that happens, the link must be updated.