Note: Please, do not add "DisneyToon Studios went out of business in 2018", because this was before that happened! Also, I turned off commenting on here due to childish comments like "I need a time machine to tell Disney to release the film in 2001 or 2002."

Dumbo II was the official sequel to Dumbo that would have Robert C. Ramirez (the director of Joseph: King of Dreams) at the helm. The film was scheduled to be released in 2001. However, production was delayed many times and was cancelled in 2006 after John Lasseter was named CEO of Walt Disney Animation Studios. The only pieces of evidence that are open to the public are a trailer that was shown on the 2001 VHS and DVD release of the Dumbo 60th anniversary edition, a scene from the unfinished film and storyboards from the unfinished film.[1]

Sometime after the events of the first Dumbo, Timothy Q. Mouse meet a series of other baby animals that are going through different childhood stages and wind up getting lost in New York City. While the animals try to find their way back home, each character would find out to fix their problems. In addition, it would provide an explanation on what happened to Dumbo's father, Mr. Jumbo. 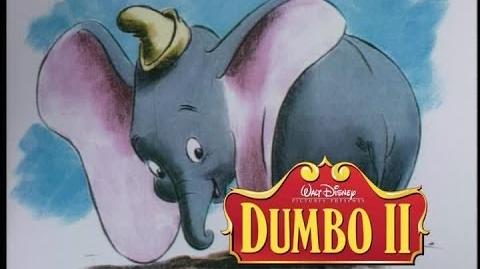