Deleted Storylines of The SpongeBob Movie: Sponge on the Run

The "Atlantis" storyline is the first pitch made for the movie. It started development around September 2014[1], and was pitched as a hybrid live-action/animated movie by Stephen Hillenburg and Paul Tibbitt after the release of the second SpongeBob movie before being rejected by Paramount Pictures, fearing that the movie would underperform at the box office due to being set in Atlantis.[2] Another reason of the pitch being cancelled was also due that the "studio changed directors."[3]

According to two Reddit posts made on November 2019, the pitch would have been about Gary being kidnapped and taken to Atlantis in order to be cloned while SpongeBob would have to save him. King Neptune would have appeared in this movie and would have been played by David Bowie. A picture attached to the post showed the planned scenery for this movie.[4][5][6] A test shoot was realized by New Deal Studios during July and August 2015.[7][8]

Paul Tibbitt confirmed the existence of this pitch and added that the third act taking place in Atlantis would have featured human actors while the paintings were meant for live-action sets. He also clarified that David Bowie was never involved in this movie.[9]

Two concept art made by Jared Krichevsky[10][11] and revealed on October 2020, showcase the original design for King Neptune and his minions and that King Neptune would have originally being portrayed by actor Will Ferrell. More concept art were later revealed by Ruben Hickman.[12] 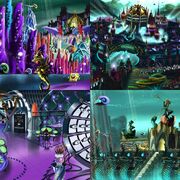 Paintings for live-action sets of Atlantis.

Concept art with SpongeBob and Sandy being surrounded by King Neptune's minions.

SpongeBob accompanied by an unknown character at Atlantis.

SpongeBob and Patrick at Atlantis.

Concept art of an octupus statue.

The "Alien Cat" storyline is the second pitch created by Paul Tibbitt [13][14] and Kyle McCulloch[15] and written by Jonathan Aibel and Glenn Berger. [16] Andrew Goodman later helped with the story in 2017.[17] Unlike the first pitch or the final version of the movie, this storyline is more "Science-fiction" inspired, and was described as a "SpongeBob movie in the mold of Independence Day."[18] This version started development around fall 2015 and was cancelled on July 2017.[19]

The main antagonists were an army of anthropomorphic cats wearing red mech-suits, lead by a character named Twinkles. This army was comprised of many spaceships such as battlecruisers, troop carriers and spacecrafts named "Catsaucer." Their homeworld was a polluted planet, composed of giant scratching posts and furniture such as an oversized piano. Some concept art also showcase a giant cat called Galcatacus, an ancient god that can use his paws to destroy everything around him. He can be seen in a storyboard where he is lured by SpongeBob and Gary through a black hole and in a flashback scene where he's destroying Gary's homeworld.

According to concept art and storyboards made by Andy Gaskill[20], Kristina Vardazaryan[21], Ruben Hickman[22], Steven E. Gordon[23], Wolf-Rüdiger Bloss[24], David Stephan[25] and Shellie O'Brien.[26] Gary was kidnapped by the cats bent on using him to free Galcatacus and turn Earth into a giant litter box, leading SpongeBob, Patrick, Squidward and Sandy to rescue Gary and save Earth.[27] Throughout the story, they would have visited different worlds. One of them was a futuristic-like world inhabited by dolphins. Storyboards showcase that at one point, SpongeBob and his friends were supposed to sneak into Bubbles' spaceship, guarded by dolphins soldiers. Another world that the group would have visited was a hellish world where a purple character named Mortius and a woman called Sarcoma live. According to two storyboards, the group would also have returned to the surface. There, they would have met human versions of SpongeBob and Patrick during a fight with the cats.

Other concept art display a flashback scene where Gary was the prince from a world inhabited by snails. During an attack by the cats and Galcatacus, Gary was evacuated through an escape pod thanks to his parents. During his escape, the capsule would have collided with the collar of Galcatacus, seemingly paralyzing him in the process. After escaping his homeworld, Gary's escape pod would eventually arrive to Earth before diving into the ocean near the Bikini Atoll island. According to a few storyboards and an interview with Paul Tibbitt, two subplots were planned. One would have involved Nicolas Cage, portraying as himself, as he would be running for the United States presidency because "he didn't get a part as president and his agents tells him no one would believe him as president."[28] It seems Nicolas Cage was later renamed to "Johnson" at one point during development, according to the copyright catalog description of Sponge on the Run.[29] Other characters presents in this subplot were Nicolas Cage's pet tiger Fluffy, an army general called Tallenback (portrayed by Jeff Goldblum) and an animal trainer named Terry, trying to repel the Alien Cats' invasion on Earth. The second subplot would have followed Mr. Krabs disguised as SpongeBob opening a "favor truck" where he sell favors and compliments to the Bikini Bottomites. According to a poster, David Hasselhoff was also planned to return in this movie.

When asked on Twitter about the storyboards, Vincent Waller wrote "I believe that was a first pass at the story, but the entire alien cat storyline was later tossed out and rewritten."[30] In an interview with Tim Hill about the movie, Tim Hill explains that "The studio had plans for a different version of the movie, but that one was scrapped. Steve was always a fan of grounded, relatable and simple stories. I think the previous script was a bit too far-fetched."[31]

According to Paul Tibbitt, there was many reasons as to why this story got cancelled. One of them being related to Donald Trump joining the 2016 United States presidential election and how it looked likely that "a reality-tv star might become president."[32] 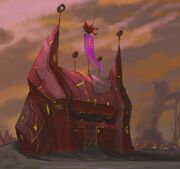 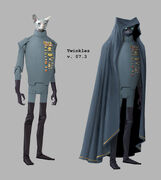 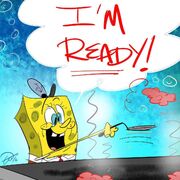 Not much is known about this third scrapped storyline aside from the fact that it was the final pitch made by Paul Tibbitt and that it acted as a basis for the final plot of It's a Wonderful Sponge/Sponge on the Run.[33][34]