Back To The Future (Eric Stoltz version)

20th Century Fox dreamed of casting Michael J. Fox in the film, but were unable to as Fox had a fair commitment with the television sitcom Family Ties. So Robert Zemeckis asked Eric Stoltz to play the role.

The full footage of Eric Stoltz's performance as a whole showoff has never been released, although a lot of photographs and a couple dialogue clips have surfaced across the internet.

The plot would be the same as the 1985 film of the same name, but with some differences. 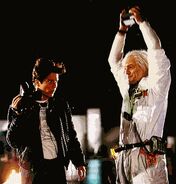