B.O.O.: Bureau of Otherworldly Operations was the title of American computer-animated supernatural action comedy film to be made by DreamWorks Animation. It is based on an original idea and directed by Tony Leondis. Tom Wheeler was said to be writing the script, with Maryann Garger as producer and Courtney Pledger as executive producing. The film would have starred Seth Rogen, Matt Bomer, Melissa McCarthy, Bill Murray, Octavia Spencer, Rashida Jones, and Jennifer Coolidge and would have been released on June 5, 2015 by 20th Century Fox.

This supernatural action comedy follows two bumbling apparitions who find themselves in an extraordinary after-life adventure when they join the Bureau of Otherworldly Operations (B.O.O.) – the ghost world’s elite counter-haunting unit – and ultimately must face off against the planet’s greatest haunter.

Some footage from the canceled film was uploaded on September 27 of the 2019. 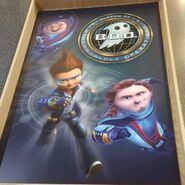 Alternative logo for the film